Works in other Locations

The sculptures of the Emanuel Hoffmann Foundation in and around Basel. 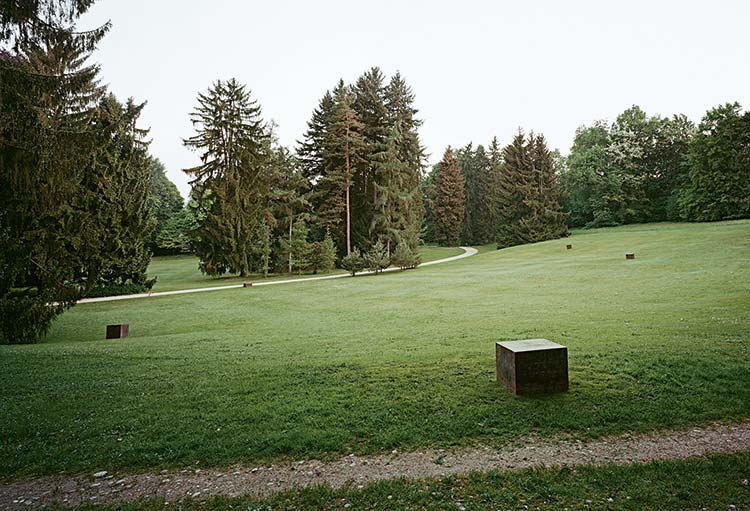 The colossal sculptures by Richard Serra (*1939 in USA) are heavyweight, site-specific works that represent an aesthetic response to landscape and topographical situations. Open Field Vertical/Horizontal Elevations (for Breughel and Martin Schwander) was created between 1979 and 1980 as a commission for the exhibition ‘Skulptur im 20. Jahrhundert’ in Wenkenpark in Riehen. This unspectacular and unusual work consists of ten drop-forged steel panels, each weighing almost two and a half tonnes, positioned at carefully selected topographical points within the grounds. The sites were determined by Serra himself with the aid of a map and repeated walks through the grounds that increased his sensibility for the setting. The work itself has no clearly defined viewing point. Instead, it is about exploring a structure of relationships across an area of some 9,500 square metres. Visitors have to take this into account as they walk down the slope, gradually realising that space is not an independent dimension but something actively generated, modified and constructed by the individual.

Location: Wenkenpark Riehen.
The installation is accessible at all times 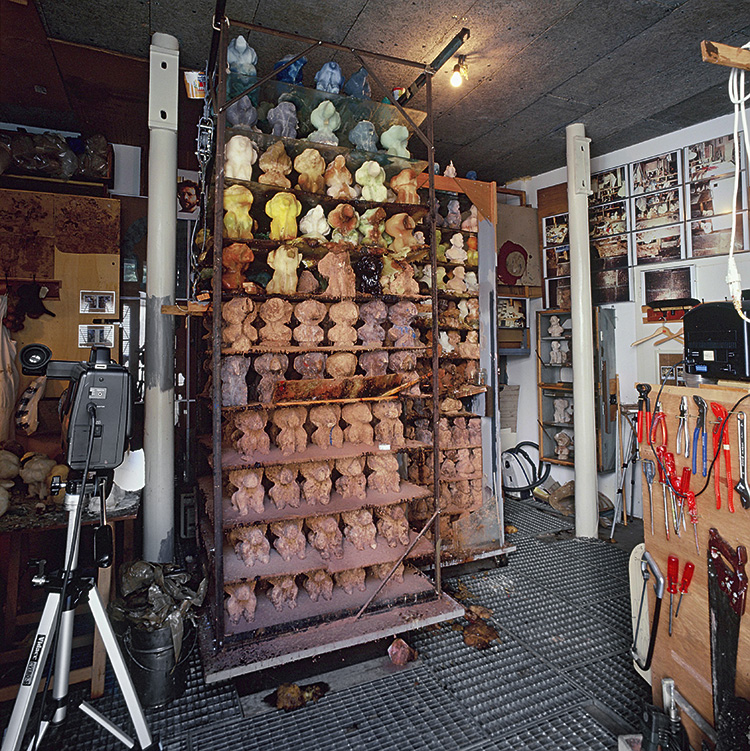 The space containing Selbstturm; Löwenturm (Self tower; Lion tower) by Dieter Roth seems uncanny yet familiar – like a mass of memories that have dropped out of time and are now engulfed in a slightly bitter smell of chocolate. Two free-standing towers of shelves are filled with layer upon layer of self-portraits and figures of lions made in chocolate moulds. In 1989 the Emanuel Hoffmann Foundation acquired the work at the suggestion of Maja Oeri, as an unfinished artistic concept. Whereas Roth initially only cast self-portraits and lion figures in chocolate, he started to add a sphinx-like hybrid by combining his self-portrait and the lion figure in 1985 and to experiment with different kinds of sugar.

The artist's former work space, rented especially for the monumental installation – which, however, is exposed to continuous decay and disintegration – reveals one of the least conventional, and indeed one of the boldest, acquisitions of the Emanuel Hoffmann Foundation. The venue opposite to the Museum für Gegenwartskunst provides an insight into the oeuvre of Dieter Roth by displaying the work Selbstturm; Löwenturm.

Location: venue opposite the Museum für Gegenwartskunst
This venue can only be visited as part of a guided tour. The tours are free of charge and are held regularly on Sundays at 2.30 p.m. Visitor numbers are limited. 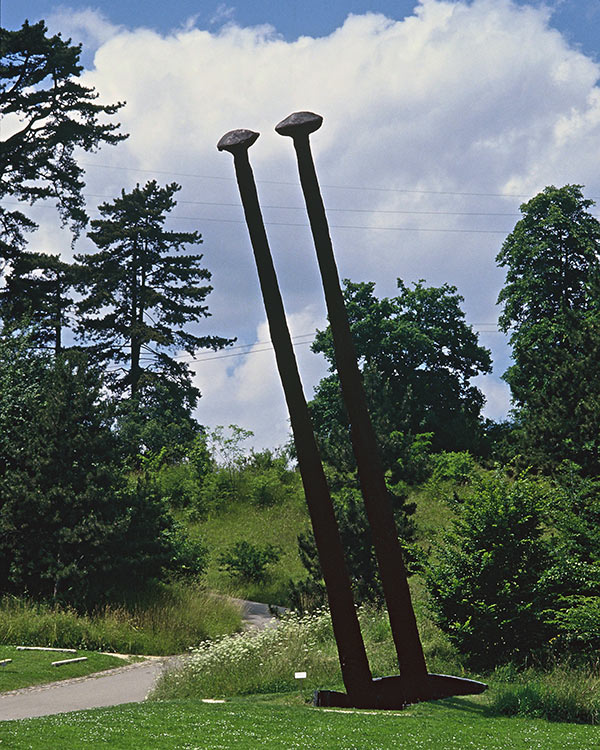 This untitled sculpture by Enzo Cucchi (*1949 in Italy) was a commission for the exhibition ‘Skulptur im 20. Jahrhundert’ at the Merian Park in Basel, organised by Ernst Beyeler, Reinhold Hohl and Martin Schwander in 1984, following on from the 1980 exhibition of the same name at Wenkenpark in Riehen. The work that he devised consists of two cast-bronze posts, nearly twelve metres long, anchored at an angle in the ground. With their elliptical tops they look a little like thin mushrooms, snails’ feelers, antennae or – because of their bark-like surfaces – charred tree trunks. They call to mind archaic images and ideas associated with the unconscious and the realms of myth and legend. This impression is heightened by the skulls that adhere to the posts like lichen to trees and that spiral upwards on one of them like on a Jacob’s ladder. With their rough, powerful presence they reflect the untamed energy of natural forces and are strikingly at odds with the highly cultivated backdrop of the man-made parkland.

How to get there
Tram no. 11, in the direction of ʻSt.Louis Grenzeʼ, to the ʻDreispitzʼ stop
Then walk to Merian Park via the entrance ʻBrüglingerstrasseʼ 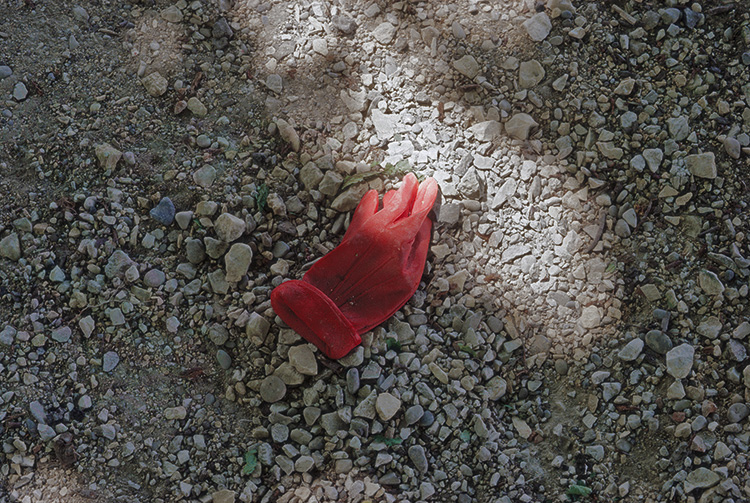 The installation Denkmal für einen verlorenen Handschuh (Monument to a Lost Glove) by Ilya Kabakov (*1933 in the Ukraine), located outside the Museum für Gegenwartskunst in Basel, comprises a red lady’s glove that has been ‘dropped’ on the gravel under a chestnut tree on St. Alban-Rheinweg in sight of the Rhine. Around it – like music stands set up for a concert – are nine panels arranged in a semi-circle. From closer to, passers-by can see that there are texts on the panels – in German, French, English and Russian. Each one has a different take on the lost glove. There are accounts of trips taken by couples in love, descriptions of feelings of loneliness, of annoyance at public disorder – all triggered by the glove that has been lying there for far too long. The nine texts create a polyphony of ideas, memories and attitudes. The stories wrest passers-by out of their daily routines – if they have taken the time to stop – and draw them into someone else’s thought processes.

Location: Rheinpromenade in front of the Museum für Gegenwartskunst, Basel
The installation is accessible at all times 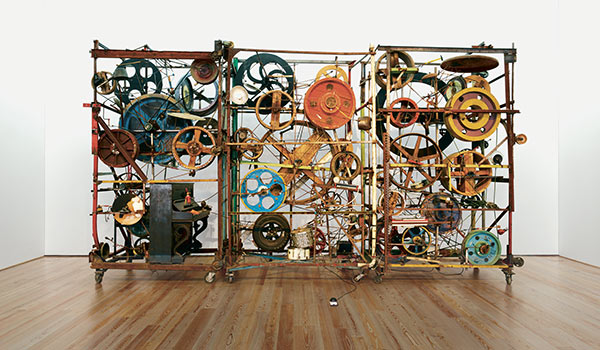 Jean Tinguely’s (1925–1991) sculpture Méta-Harmonie II has been on permanent loan to the Museum Tinguely since 1996. This monumental, three-part structure on wheels, measuring almost seven metres in length and four metres in height, is an impressive example of Tinguely’s moving sound sculptures built of found materials. In Méta-Harmonie II, which Tinguely described as a ‘sound-mixing machine’, several dozen wheels of varying sizes and materials interact. The sculpture also integrates used musical instruments such as a piano, drums and plastic keyboards, played by batons, wheels and puppets which, in turn, are operated by motors and v-belts. The various wheels rotating gently by different means create a randomly generated carpet of sound.


The credit line for all works reads Emanuel Hoffmann Foundation, on permanent loan to the Öffentliche Kunstsammlung Basel